HIV Burden in MENA and Strategies being adopted to fight it

HIV infection is the most disturbing infection that has emerged in recent history. The risk of being infected can be associated with both individual’s knowledge and behavior as well as community vulnerability influenced by cultural norms, laws, politics, and social practices. As of 2018, around 37.9 million individuals are afflicted […] 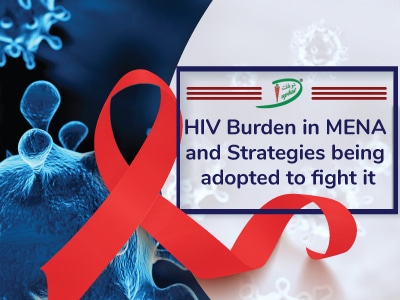 HIV infection is the most disturbing infection that has emerged in recent history. The risk of being infected can be associated with both individual’s knowledge and behavior as well as community vulnerability influenced by cultural norms, laws, politics, and social practices. As of 2018, around 37.9 million individuals are afflicted with HIV/AIDS globally. Out of all regions across the globe, Middle East and North Africa boasts of the lowest prevalence of HIV infections. As per the report of UNAIDS, 270,000 HIV infected individuals have been identified the MENA region, with an overall prevalence of 0.1 per cent among adults (15-49 years). Even though the Middle East and North Africa (MENA) region has had a historically low prevalence of HIV, there is an increasing concern of rising morbidity of patients suffering from AIDS-related illnesses. As per the reported statistics, 8400 AIDS-afflicted people died of various illnesses in the region. The main reason is poor access to antiretroviral treatment.

The populations most affected by HIV in the Middle East and North Africa is considered to be the one who injects drugs, female sex workers, men with homosexual relations, migrants and mobile populations, etc. Thus, as per statistics, the major portion of HIV infected individuals are ones living on the fringes of society. Another trend which was uncovered was that the HIV infection is more prevalent in populations which are addicted to substance abuse, where Individuals share injections to inject drugs into their system used by someone else before, drastically increasing chances of transmission of HIV infected blood.

The MENA region faces drug-related pressure, as there is a great supply of pure and low-cost heroin in the region. The countries with the greatest drug abuse in the region are Iran, Egypt, Morocco, Libya and Tunisia, contributing to the high prevalence of HIV in the MENA region. On the other hand, Kuwait, Oman, Syria and Lebanon are the countries with the lowest percentage of HIV prevalence of patients.

The governments of the different countries across the region are involved in one of the other endeavors that can improve the lives of HIV infected population and bring general awareness to the general population. HIV prevention programs in the Middle East and North Africa include provision of condom availability and use for sex workers, HIV awareness sessions and workshops for educating masses on safe sex, programs to prevent mother-to-child HIV infection transmission, Substance abuse reduction, and administration of pre-exposure prophylaxis. Through these programs, a drastic change has been observed across the countries. For instance, 96% of sex workers in Lebanon report using condoms, followed by 60%-65% of sex workers in Algeria, Djibouti, Iran and Tunisia.

In terms of prevention of mother to child transmission, Dijbouti has witnessed the biggest reduction in new infections among children in recent years (44% reduction between 2010 and 2017). Moreover, as of 2018, Algeria, Iran and Lebanon have initiated PrEP pilot studies to introduce PrEP as a part of a comprehensive package of services for people most at risk of HIV. Iran and Morocco have initiated a nationwide harm reduction strategy, as these countries face a great proportion of substance abuse among its citizens. Another very successful initiative has been conducted by Saudi Arabia’s National AIDS Program (NAP), which facilitates marriages between people living with HIV infection. The project was implemented through the Saudi Charity Association and has helped more than 100 HIV infected individuals in finding partners and giving birth to infection free babies.

There are also programs that invite Private Sector partners to address the stigma associated with AIDS and HIV infected individuals, especially to introduce antiretroviral treatments as well as help in increasing awareness so that the infected individuals can be treated with said antiretroviral treatments. Despite unfavorable conditions and increasing emerging cases of HIV infections, countries such as Saudi Arabia, Iran, Egypt, and Morocco in the region have put significant effort into the scale-up of their response to this growing epidemic. This not only indicates an increased political will to address the HIV epidemic but also beholds the hope of fighting and ultimately winning the fight against HIV and AIDS.