The Biosimilars scenario in the MENA Region

Biosimilars, a cost-effective alternative to expensive biologics, have emerged to become a viable solution to the patient access barrier which impacted earlier in case of biologics. Biosimilars are increasingly becoming popular for treating a wide range of life-threatening diseases and represent a rapidly expanding segment of pharmaceutical industry. As the […]

Home Blog The Biosimilars scenario in the MENA Region 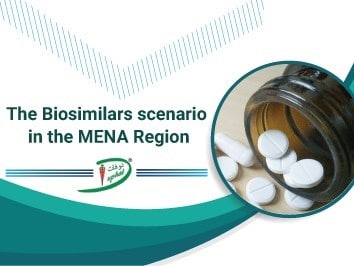 Biosimilars, a cost-effective alternative to expensive biologics, have emerged to become a viable solution to the patient access barrier which impacted earlier in case of biologics. Biosimilars are increasingly becoming popular for treating a wide range of life-threatening diseases and represent a rapidly expanding segment of pharmaceutical industry. As the name suggests, Biosimilars are therapeutic drugs with similar but not identical characteristics of their reference drugs, which offer a cheaper alternative for these reference biologics.

MENA region can be considered as the most persuasive and attractive pharmaceutical markets among other emerging markets. The population in the MENA region is ageing fast with an increase in the burden of high-cost chronic diseases like cancer and diabetes. The increase in demand for better healthcare has fuelled the expenditure on health care over the past few years and as a result the pharmaceutical market in the MENA region is expected to grow and set to emerge as one of the leading emerging markets.

However, the path is not as easy as it seems. The regulatory framework, along with the pricing strategy for biosimilars in most of the MENA countries, is still in its infancy and requires a lot of modifications. Defined by a new healthcare landscape, Biosimilars represent a challenging frontier for the MENA region. In addition, other factors like distrust of physicians and regulators, and lack of awareness about different treatment pathways are contributing to a low biologic and biosimilar uptake by the patients. These challenges pose a big question about how to increase uptake and drive biosimilar use among healthcare leaders.

Nevertheless, with the pace of ongoing improvement in establishing more stringent biologics and biosimilar policies, the healthcare market represents a crucial opportunity to address affordability and broaden the access to quality treatment for patients in these regions. While some of the countries in the region have established pathways to get the approval of biosimilars, these pathways vary greatly:

Although there are only a handful of countries that till date don’t have specific regulations on biosimilar pathways, still many countries are slowly gearing up to be the leaders, paving the way for the growth of biologics and biosimilars in their respective markets. In July 2018, Xbrane Biopharma AB (Xbrane) and STADA Arzneimittel AG (STADA) entered into a collaborative agreement for the development of Lucentis (ranibizumab) biosimilar for the treatment of several eye diseases mainly neovascular age-related macular degeneration, diabetic-related macular edema and retinal vein occlusion, covering Europe, the US and a variety of MENA and APAC markets.

To sum up, the biosimilar use is still considered a new phenomenon in the Middle Eastern areas. Many countries have put certain restrictions on the use of biosimilars due to the lack of awareness of their use and manufacturing processes and are sceptical about adopting their use owing to bad experiences of intended copies.

The biosimilar market is facing lots of challenges from economic to political. While there exist many hampering issues such as need for cost-saving, misconceptions of biosimilar approval pathways, lack of robust regulatory frameworks, and varying drug purchasing regulations, companies targeting the biosimilar business in these regions will have to implement a more diverse and complicated strategy to steer through this turbulent landscape.