Cancer diagnosis in the MENA region: Headway toward a better future

Cancer is an increasing problem not just in the Middle East and North Africa (MENA) region but also globally, securing a significant place as the leading cause of death. It is a major public health problem that affects every country in the MENA region regardless of economic and social situation. […]

Home Blog Cancer diagnosis in the MENA region: Headway toward a better future 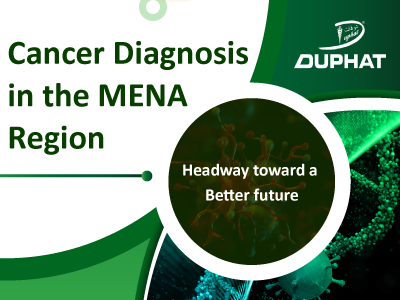 Cancer is an increasing problem not just in the Middle East and North Africa (MENA) region but also globally, securing a significant place as the leading cause of death. It is a major public health problem that affects every country in the MENA region regardless of economic and social situation. Although the incidence of cancer in the region is still not popularly known, as per World Health Organization (WHO), the area may face alarming rates of various cancers in the coming decades. Some statistics in the MENA region also claim that the highest relative global increase of cancer in the Arab world might be due to multiple factors, including population aging, changes in cancer risk exposure, and improved cancer diagnostics. Since the global burden of cancer is disproportionately greater in low- and middle-income countries (LMICs), including countries in the MENA region, national cancer control strategies have been identified as essential tools for reducing and managing the growing burden of cancer in these countries.

Cancer-check Authorities in the MENA region

The development of National Cancer Control Plans (NCCPs) in these regions has been acknowledged as an essential policy intervention to cope with the current and future cancer burden. Cancer registration, defined as the systematic collection and analysis of tumor data, is an integral foundation of operationally successful NCCP. It varies immensely from country to country in the MENA region and faces varied challenges. However, according to the International Agency for Research on Cancer (IARC), population-based cancer registries (PBCRs) in LMICs have been developing moderately, which remains an unmet need as underinvestment and subsequent lack of human resources needs to get improved at a quick pace now. The limited capacity for cancer registration in the region is also due to political, social, and economic obstacles disproportionally affected by armed conflicts and ultimately halt cancer registration in those areas, especially Syria, Yemen, and Libya. Besides, the pandemic caused by novel coronavirus SARS-CoV-2 has affected registries’ operation and the attendance of its staff, slowing the already moderate pace.

On the brighter side, the conduction of oncology clinical trials in MENA is on the rise. Of note, the number of active oncology clinical trials (Phase I–IV) has risen in recent years in MENA, from 47 trials in 2015 to 53 trials in 2020. Moreover, the MENA region has also realized the importance of a multilevel approach, involving collaboration between multiple stakeholders, including the pharmaceutical industry, regulators, government, and health care professionals.

Indication-specific growth in the MENA region

The burden of lung cancer in these countries is huge. Statistics predict a rise in incidence soon due to increased use of tobacco products, smoking and many others. The disparities in access to diagnostic tests and therapeutic interventions in the MENA region suggests that many countries in the region do not have access to clinical trials. Also, the estimated numbers of new lung cancer cases in the MENA region in 2018 were 79,887, with a 5-year relative survival rate of just 8%. The highest death percentages were observed in Morocco and Tunisia, whereas the lowest was in Yemen and Egypt. In conclusion, lung cancer incidence varies among the countries of the MENA region due to differences in smoking prevalence, access to certain diagnostic and therapeutic options

The good news is that the pathologic diagnosis of lung cancer is made in almost all cancer facilities in the MENA region. Testing for EGFR and ALK receptor tyrosine kinase (ALK) is performed on a send-out basis where the samples are sent to referral laboratories in the country or internationally.

For surgical treatment of lung cancer, many trained oncologists have been recruited in the tertiary health care hospitals who deal with early-stage lung cancer with curative intent surgery. If we compare historical data, the MENA region has reflected an extensive improvement in the diagnosis process now. However, we do believe that there needs to be more work done in this segment. As far as access to radiation therapy is concerned, it varies among countries based on the available machines, the population, and the geographical distribution of the centers.

Considering the systemic therapies, the oncologists in the MENA region usually refer more to the National Comprehensive Cancer Network (NCCN) guidelines than to the European Society for Medical Oncology guidelines (ESMO) for the treatment of their patients. Standard chemotherapy agents such as platinum, taxanes, and pemetrexed are available throughout all the MENA regions; however, targeted therapy and immunotherapy availability is limited as the development is ongoing. Immune therapy using checkpoint inhibitors is used more frequently in the second-line treatment and less frequently in the first-line treatment, mainly for patients who are PD-L1–positive.

As per the literature study from varied sources, Arab women experience a variety of cancer treatments such as radiotherapy, chemotherapy, mastectomy and lumpectomy. The MENA region is working dedicatedly to give breast cancer patients the best outcome even when there is a shortage of care facilities; in fact, few countries provide patients with the best support to treat the disease. As of 2014, Oman and Kuwait had high access to care for their citizens and provided good coverage for breast cancer treatment. In both countries, citizens can access the full range of treatment at low or no cost. However, screening programs are still less developed in these countries. Both of these countries have their national cancer registries where they publish the annual incidence data of the disease. In contrast, data collection in Egypt is quite limited, and if they have any access through referral, the patients might face very high treatment costs as out-of-pocket payments in Egypt are very high.

There are many trials in development for lung and breast cancers in the MENA region which clearly states the progress of oncology trials in those regions. The key competitors are Eli Lilly and Company, AbbVie, AstraZeneca, Merck and Novartis.

A glimpse of Lung Cancer Trials in the MENA region:

A glimpse of Breast Cancer Trials in the MENA region:

With the developments above in oncology in the MENA region, one can assume that research is at its full potential and projected to grow in the future. The only question that arises is the access of these drugs to the patients, their enrollment in the clinical trials and their screening for the process. For this, different stakeholders, not just limited to health care, need to focus on the accessibility of these drugs to the patients so that the innumerable rates of incidence of various cancers could be effectively stopped.