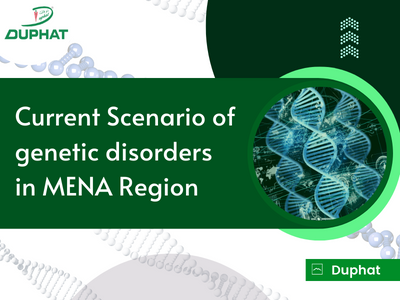 A significant proportion of the population is affected by genetic disorders in the Arab world. According to the Catalogue for transmission genetics in Arab (CTGA), there are 451 genetic disorders in the combined Arab populations of Bahrain, Oman, and the United Arab Emirates (UAE). Given the small populations involved, this number is, by any measure, exceptionally high. Among these three countries, Oman has the highest Arab population reporting the most number of disorders, followed by the UAE. In comparison, the population of Bahrain is said to have the fewest genetic diseases (Tadmouri et al., 2008).

As per the government portals of UAE, about 75 out of 1000 babies born in the UAE have a congenital disability, mostly of genetic origin. Furthermore, according to the UAE Genetic Diseases Association, genetic disorders are the fourth-leading cause of mortality in UAE, and the country ranked sixth among 193 countries in terms of the prevalence of congenital disabilities, primarily due to genetic factors (Chronic Diseases and Natural Disorders – The Official Portal of the UAE Government, n.d.). Taking into account other populous and significant countries of the MENA region, i.e., Egypt reported about 73.25% had a family history of different genetic disorders.

Among the variety of genetic disorders, some of the most prevailing disorders in the Arab world include blood disorders (thalassemia, sickle cell anemia, and G6PD deficiency), chromosomal defects (Down syndrome), developmental problems and defects (Fragile X Syndrome), and autosomal-recessive disorder (cystic fibrosis).

In context to blood disorders, sickle cell anemia is the most prevalent disorder among people from Africa, India, the Caribbean, the Middle East, and the Mediterranean. Various studies show that the incidence and prevalence range from approximately 0.04% to 2.1%. According to the National Organization for Rare Disorders (NORD), G6PD deficiency has a high prevalence rate in Africa, the Middle East, certain parts of the Mediterranean, and certain areas in Asia. Another most prevalent disorder, thalassemia, is a major concern of the healthcare sector in many MENA countries, particularly the Gulf Cooperation Council (GCC) countries and beta-thalassemia in Egypt.

In addition, according to various studies, the Down syndrome prevalence rate among Saudi Arabia nationals reported was 18 per 10,000 live births. Similarly, the rate reported in other nations includes Oman (1:500) and Qatar (1:546). Furthermore, according to the Centre for Arab genomic studies, in Kuwait, the incidence rate of Fragile X syndrome was reported to be approximately 11% (Fragile X Mental Retardation Syndrome – CAGS, n.d.). From the same source, the incidence and prevalence of cystic fibrosis in Bahrain were found to be around 1: 5,800 live births, and the prevalence is 3: 100,000 individuals (Cystic Fibrosis – CAGS, n.d.).

Why is the Arab world prone to hereditary disorders?

Genetic and congenital problems are more prevalent in Arab countries than in industrialized nations, and recessively hereditary diseases account for a sizable share of physical and mental disabilities. Different factors that may contribute to the high prevalence of genetically determined disorders include:

The treatment landscape of genetic diseases in the MENA region

MENA region is currently lacking in terms of approved treatment for genetic diseases. Very few therapies are approved in the region for different genetic disorders like recently, in 2022, Emmaus received approval from the UAE Ministry of Health for Endari® (L-glutamine oral powder) indicated for the treatment of sickle cell anemia. However, previously, in 2019, the company entered into an exclusive agreement with Taiba Healthcare under which Taiba will be able to register, commercialize and distribute endari® in certain countries of the MENA region. The limited approved drugs could be due to the fact that only a small number of labs—in some countries—conduct genomic studies and that sequencing data are kept in silos and not widely shared is likely a result of social stigmas and legal restrictions related to genetic information, which ultimately make the process of obtaining research consent difficult.

Unlike other regions like America and Europe, the investigation and approval of therapies in less in the MENA region. Therefore, the number of emerging players in these regions is also not much. For example, in 2021, Silence Therapeutics announced that the investigation of SLN124 in people with thalassemia had been dosed their first patient in the GEMINI II Phase I clinical study at the Jordan University Hospital, Amman, Jordan, which is one of the locations among 25 trial sites. Additionally, Phase III drugs such as Crizanlizumab (SEG101) and Inclacumab indicated for sickle cell anemia are under development in multiple study locations, including some countries of the MENA region.

Despite the challenges, numerous Arab nations have started affordable preventative programs for certain common genetic disorders. The kind of screening program is primarily influenced by the time of life at which it is made available. In every country, genetic screening programs are carried out either before or after conception or in adolescents and adults before conception, but when they are thinking about getting married and starting a family. Following are some of the major prevention programs adapted by the countries.

The growing prevalence of genetic diseases is still a concern in the MENA region. This challenge is due to the various factors involving limited approval of therapies and a lack of comprehensive education and awareness regarding the control/management of the disease. In addition, the Arab family is distinguished by its large size, high maternity and paternity ages at conception, and substantial endogamy, with consanguinity rates between 25 and 60% that are 100 times greater than the 0.2% consanguinity rate in Western countries. As a result, it is anticipated that Arab genomes would have an enormous burden of homozygous regions (ROH), increasing the occurrence of recessive diseases.

The field of human genetics will benefit greatly from extending sequencing research in the Middle East because of their enrichment for autozygosity, which can help find the association between recessive genes and disease. Unfortunately, this region continues to be underrepresented in extensive genetic studies. This underrepresentation may be caused by several problems that need to be resolved to effectively harvest Middle Eastern genomic diversity and advance the understanding of genetic disorders.

In conclusion, even though there aren’t many emerging treatments for the discussed genetic disorders in the MENA right now, the ultimate goal of doctors and researchers is to increase awareness and improve diagnosis among people. To boost precise genomic diagnostics and therapeutics, it is promising that national genome projects have begun to emerge in the Gulf region (Kuwait, Qatar, Saudi Arabia), which will hopefully spread to other nations and result in the sharing of more comprehensive and representative genetic data from the Middle East (Abou Tayoun & Rehm, 2020).