According to the Centre for Arab Genomic Studies, the SMA prevalence in Gulf Cooperation Council (GCC) populations is thought to be at least 50 times higher than in the US, with more than 50 cases per 100,000 live births, compared to only 1.2 in the US. Additionally, various studies conducted […] 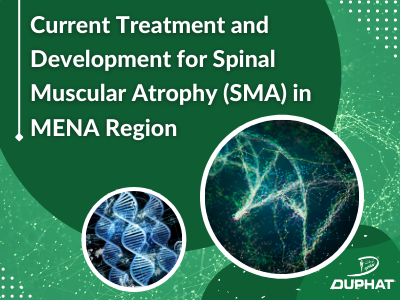 According to the Centre for Arab Genomic Studies, the SMA prevalence in Gulf Cooperation Council (GCC) populations is thought to be at least 50 times higher than in the US, with more than 50 cases per 100,000 live births, compared to only 1.2 in the US. Additionally, various studies conducted in the MENA region reported incidence of SMA to range from 10 to 193 per 100,000 births, and the incidence is almost 40-fold higher than in the western world. Moreover, the carrier frequency is also estimated to be higher, with 1 in 20 individuals compared to a global range from 1/45 to 1/100.

Egypt reported the frequency of SMA to be 17.7/100,000, with type I being the most common, accounting for almost 68% of cases, followed by type II (27.3%). In Egypt, SMA constituted about 18.6% of all neuromuscular diseases. A study in Morocco determined a carrier frequency of 1 in 25 and an estimated prevalence of 1 in 1,800, including all factors. The deletions of the SMN1 gene are major mutations in the MENA region similar to global and other countries. In Saudi Arabia, a study in 121 patients showed that the homozygous deletions of exons 7 and 8 of the SMN1 gene were found in 94% and 87% of the patients, respectively.

One of the major reasons for such high prevalence is consanguinity; a study in Saudi Arabia showed 55% of cases of Spinal Muscular Atrophy had a history of consanguinity. Similarly, in Algeria, a genetic study showed consanguinity of 47%.

As per DelveInsight’s analysis, as of 2015, National NBS programs with extensive screening coverage are available in Bahrain, Egypt, Iran, Israel, Kuwait, Oman, Qatar (only for Qataris), State of Palestine, Saudi Arabia, and the United Arab Emirates.

Approvals and reimbursement in the MENA region

The Spinal Muscular Atrophy treatment landscape began changing in 2016 when US FDA approved the first treatment Spinraza (nusinersen). The standard of care in SMA is highly supportive in nature and consists of nutritional and respiratory support, as needed, in addition to management of muscle weakness complications. There have been many recent developments in the field of Spinal Muscular Atrophy, nusinersen (Spinraza), onasemnogene abeparvovec (Zolgensma), and risdiplam (Evrysdi) are three innovative disease-modifying drugs.

SpinrazaThe drug is fully reimbursed in Israel, which became available through state sal bri’ut or “health basket” in late 2017. In Turkey, the cost of the Spinal Muscular Atrophy drug, EUR 73,000 (over USD 88,700) per dose, is covered by the country’s Social Security Authority for 1,100 families across the country.

Moreover, as per the TreatSMA foundation, pricing negotiations are underway for Spinraza in Kuwait, Qatar, Saudi, and UAE. In the case of Saudi Arabia, recently, an entry agreement was established between the Saudi Ministry of Health (MOH) and the manufacturer of Spinraza. The agreement is expected to address many issues since a scientific committee is involved in assessing patients’ eligibility to Spinraza and monitoring the treatment outcomes upon which the reimbursement will be based.

In addition to Spinraza, Zolgensma – reimbursed in Egypt, as stated by Novartis. Recently, Egypt’s President Abdel Fattah El-Sisi spoke about the country’s efforts to treat children suffering from muscle atrophy. Attending the event, Health Minister Hala Zayed said 204 muscle atrophy cases had been detected in Egypt, of which more than 32 can be treated. The Ministry of Health affirmed that Egypt would start the treatment of 10 out of 32 patients with muscular atrophy in one of its hospitals. Moreover, in June 2021, the Egyptian National Drug Authority also approved risdiplam, the first registered drug for the disease in Egypt.

“There are means for early detection of this disease in the early months of the child’s birth. If we knew that, there would be treatment, which costs up to USD 3 million per child.”

Zolgensma is also available in Israel. There are almost 130 Spinal Muscular Atrophy patients in Israel, and two of them are set to receive Zolgensma after the country’s top health insurer claimed that it would cover the USD 4.25 million cost of one-time Zolgensma gene therapy.

Novartis has negotiated Zolgensma access for half of the Spinal Muscular Atrophy patient population in six countries in the MENA region. Under the global Managed Access Program (MAP) in 2020, Novartis provided free 100 doses that have helped to provide treatment to various patients in the Middle East, and since the company renewed the program, it also promised to provide 100 more doses in 2021.

Spinraza costs USD 125,000 per injection, which needs to be administered three times a year for whole life after four loading doses in the span of almost 2 months, costing half a million USD. Zolgensma, approved as gene therapy, is a one-time treatment with a hefty price tag of USD 2.125 million, making it the most expensive therapy in the world.

Evrysdi, developed by Genentech (a Roche company), has been approved for children 2 months and older. The cost is dependent on weight, and for an infant under 15 pounds – usually 2 years of age – the annual price checks in at less than USD 100,000, and it is capped at USD 340,000 per year, or 44 pounds, normally around the weight of a 6-year-old. These prohibitive costs place curative Spinal Muscular Atrophy treatments out of most people’s reach.

Internet is filled with stories from all over the globe, including the MENA region, where families are campaigning to raise funds for their children to afford these expensive drugs. In one such case, the ruler of Dubai sponsored the cost of treatment that is