Healthcare Burden and subsequent advances in the Healthcare Sector of UAE

The United Arab Emirates is ranked among one of the most developed countries in the world. According to a survey by the World Bank, the GDP of the UAE reached all-time high to USD 414.18 Billion last year, an increase of around USD 399.458 Billion from USD 14.721 Billion in […] 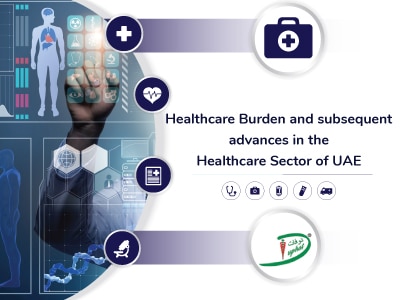 The United Arab Emirates is ranked among one of the most developed countries in the world. According to a survey by the World Bank, the GDP of the UAE reached all-time high to USD 414.18 Billion last year, an increase of around USD 399.458 Billion from USD 14.721 Billion in the year 1975.

The consistent growth in people’s per capita income and a considerable fall in poverty rates has increased the quality of living standards in the UAE. However, luxurious living is leading to sedentary life style, increased preference to junk and high calorie fatty food, and physical inactivity. In addition to this, practices such as prolonged sitting, inappropriate body postures, and untimely food habits, has taken a toll on the health of teens and adults across the UAE.

A survey revealed that the last ten years have seen an increasing trend of chronic non-communicable diseases such as cardiovascular diseases, obesity, diabetes, etc. Consequently, associated comorbidities such as diabetes, kidney problems, asthma etc. have started to prevail among the Emiratis. For instance, cardiovascular diseases account for almost 30% of deaths in the UAE, while the average mortality in case of heart attack or stroke is 20 years younger than the average global mortality, globally.

In the year 2015, Sheikh Mohammed, Vice President and Prime Minister of the UAE, launched a Fund to Finance Innovation worth AED 2 billion to advance sectors of health, education, science, technology, and others. The country also garnered the support and guidance from various international organizations such as WHO to help the region steer into the right direction.

The main aim is to prevent non-communicable diseases, and in turn, improve the overall health, which falls in line with the Dubai’s Vision 2021. In its journey to realize its Vision 2021, UAE is working to catalogue itself among the countries with the best healthcare in the world. 42.2% of the federal budget of UAE is devoted to Social development and overall well-being of the people, out of which the government has set aside around 7.3% for the healthcare domain.

Not only this, the UAE is also implementing mandates to exempt the healthcare businesses from taxes, promoting ease of business, and various other initiatives to facilitate increase in FDI, with an aim to provide world class healthcare at affordable rates. Also, the UAE government has strategized the way healthcare is dealt with through its Abu Dhabi Healthcare Strategic Plan and Dubai Health Strategy 2021, to advance the healthcare domain and to attract the Pharma companies to UAE. Such advances are not only expected to better the healthcare situation of the citizens of UAE, but is also expected to become a hotspot for medical tourists from across the globe. Subsequently, UAE is now becoming a hotbed of potential opportunities for pharmaceutical companies across the globe. Some of the key Pharma companies established in the MENA healthcare market are Pfizer UAE, Johnson & Johnson Middle East, Merck UAE, Novo Nordisk Pharma Gulf, Gulf Pharmaceutical Industry-Julphar (JULPHAR), Valeant Pharmaceuticals MEA FZ LLC, and several others.

Recent years have witnessed a boost in industrial, academic and government collaborations in the healthcare sector. The government is also collaborating with the private pharmaceutical and biotech companies to increase Public-Private-Partnerships (PPP).

Thus, UAE’s financial standing, its geographical position, and the government’s efforts towards healthcare sector neatly complements the country’s dream of excelling in providing value-based healthcare to its citizens, and also to medical tourists from across the globe.