Hemophilia A: Current players and quick update on emerging therapies in MENA Region 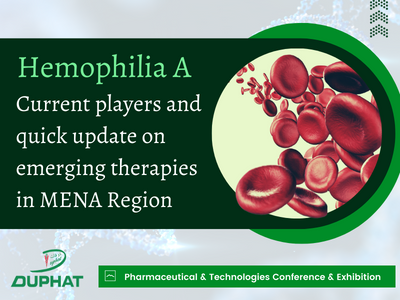 Hemophilia A is a genetic disorder quite prevalent across the globe affecting almost every patient population globally. Based on severity, hemophilia A can be classified into three stages: severe (<1% of FVIII in the blood), moderate (1–5% of FVIII in the blood), or mild (6–49% of FVIII in the blood. There are three main categories to treat hemophilia: factor replacement therapy (the missing factor is replaced synthetically for the patient), desmopressin acetate therapy (uses a nasal spray or tablet to boost factor VIII levels to reduce bleeding incidents), and gene therapy. Although emerging treatment regimens have shifted their focus to gene therapies, the road to a cure still faces obstacles.

In 2016, the Kingdom of Saudi Arabia (KSA) reported 334 hemophilia A cases. Among these, the number of prevalent and incident cases of hemophilia A with clinically identified inhibitors were 48 and 4, respectively.

In the MENA region, several therapies have been approved by the regulatory authorities of the respective countries. Recombinant FVIII class, HEMLIBRA – bispecific factor IXa- and factor X-directed antibody, is expected to take a major share in the markets, and impact is expected to be more pronounced in products with a short half-life. Hemlibra is approved in almost all of the MENA countries. The reason behind this is a strong performance in the clinical trials and an advantageous one-week dosing schedule. Because of its extended half-life, the patient switch is even more. Also, one cannot oversee the subcutaneous route of administration which makes it a great success in this segment of high unmet needs. It is the only approved medicine for all people with hemophilia A, with or without factor VIII inhibitors, and is approved in more than 100 countries, including all of the MENA region.

In May 2017, Sobi announced that the Saudi Food and Drug Authority (SFDA) in the Kingdom of Saudi Arabia has approved Elocta (efmoroctocog alfa), a recombinant human factor VIII Fc-fusion protein with an extended half-life, for the treatment of hemophilia A.  Elocta was the first extended half-life and recombinant factor VIII Fc fusion protein therapy approved for the treatment of hemophilia A in Saudi Arabia, previously approved in Kuwait in 2016. In June 2022, Esperoct was approved in Saudi Arabia as well.

“We will now focus on ensuring access to Elocta for people living with hemophilia A across other Middle Eastern states. This is a very important milestone to ensure that patients with hemophilia A have early and sustainable access to this bleed prevention treatment.”

The community’s social integration and economic well-being are significantly impacted by hemophilia as a disease and its management. The inability to participate fully in society and the high cost of medical care make this illness a severe issue for all hemophiliac sufferers. Desmopressin (DDAVP) or antifibrinolytics may treat persons with mild hemophilia A. However, extended half-life medicines and more cutting-edge methods like siRNA, bi-specific antibodies, and gene therapy are expected to continue to dominate the field of hemophilia treatment. Since AAV vector-based gene therapy is thought to be the first curative treatment option for this bleeding illness, expectations are high. It should be underlined that adequate financing and strategic alliances are essential throughout the MENA area to offer a platform to support real advances in gene therapy R&D.