MENA: Can it become a prime hotspot for the healthcare sector?

As a country grows economically, it brings immense growth and development. The Middle East is one of the best examples, which has showcased its ability from time immemorial. That said, the healthcare sector is not far behind; it is enjoying rapid progress and advancement. In the next ten years, it […]

Home Blog MENA: Can it become a prime hotspot for the healthcare sector? 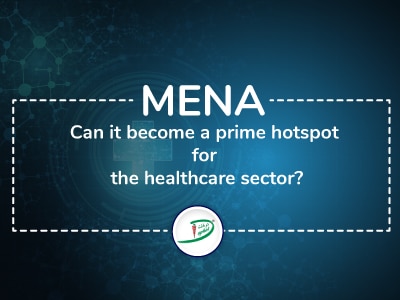 As a country grows economically, it brings immense growth and development. The Middle East is one of the best examples, which has showcased its ability from time immemorial. That said, the healthcare sector is not far behind; it is enjoying rapid progress and advancement. In the next ten years, it might be exponentially ahead of other countries.

From the time when the Millennium Development Goals (MDGs) in 1990 was announced, many countries of the MENA region made major changes in maternal and child health along with other indicators, wherein life expectancy increased, and maternal, and infant mortality declined significantly with time.

According to reports, government spending on healthcare across the MENA region is expected to reach US$ 144 billion by 2020, which will be notably higher than the $81.1 billion recorded in 2011, for a CAGR of 6.6%, wherein the worldwide healthcare market was believed to have been worth $5.9 trillion in 2010.

Their prime focus is on achieving better health, universal health coverage, and overall well-being. Technological development, like digital services, will be among the essential factors in transforming the healthcare realm. Although the growth rate of per capita has not kept pace with the growth rate of GDP per capita, the countries are working in this domain diligently and may deliver outstanding results in the near future.

The MENA region is categorized by two very diversified groups in terms of income and population; the Arabian Gulf (GCC) countries that consist of some of the highest per capita levels in the world with small population bases. Conversely, there are other neighboring Arab countries with a large population base, low GDP per capita, that have undergone recent positive regime change.

Though the MENA region is experiencing an epidemiological transition from a high burden of infectious disease to an increasing burden of noncommunicable disease, the expansion in health infrastructure, human resources, and technology will overcome these issues and will impact public and private sector equally and pragmatically. More so, countries like Egypt, Jordan, Lebanon, and Tunisia have become regional centers for medical tourism due to the perceived high quality of some services offered in their private sectors.

By almost any measure, universal health has improved dramatically in recent decades in the MENA region, despite diverse political, economic, social, and health challenges. However, the area is still facing substantial disputes every now and then, which needs attention and preventive measures.

In an effort to improve health outcomes in the MENA region and achieve universal health coverage, different countries have to overcome different sets of challenges so that all people are able to receive needed health services of adequate quality without facing financial hardship as a result of using the services. As healthcare organizations around the world are under an increased burden to deliver superior and efficient care to burgeoning populations, the financing is planned in such a manner that all individuals have access to operative public health and personal health care, as it has a comprehensive and government-funded health services, like low-cost medical services, which delivers high standard of healthcare with rapidly developing private sector.

As per the WHO’s definition of health financing, the MENA region uses a common analytical framework for the 11 countries. Its design is built around the three functions of revenue collection, pooling, and purchasing, and the three universal health coverage dimensions of population coverage, benefits package, and financial protection.

As the supply of healthcare in the Middle East and North Africa (MENA) region and around the world is going forward, the need for real estate and investors are of utmost importance. Since this region is a prime hotspot for newer improved therapies, it will attract a larger pool of investors, which will contribute considerably for better healthcare management.

Governments in MENA are inviting more private enterprise participation into the healthcare industry to offset some of the costs of ramping up projects and to raise the level of care given to residents to world-class standards. Countries like UAE and Saudi Arabia have successfully convinced renowned institutions, such as the Johns Hopkins, Mayo Clinic, Cleveland Clinic, and Harvard Medical International to partner with regional hospitals to lift local treatment standards and medical tourism programs. Organization, such as the UAE Ministry of Health and Prevention, have initiated free medical consultations along with proper treatment plans for 24 hours services. Also, different government and private organizations in collaboration provide free primary and secondary healthcare services to citizens living in remote areas, which has been named as Mobile Healthcare Initiative Enaya. There is a Smart patient portal, wherein a user can have a detailed medical history, laboratory reports, and other health-related documents.

The remarkable changes in the education domain are continuously contributing to growth and advancement. A willingness to adopt new ideas brought their concepts and innovations to surface in the healthcare sector in topical years. It is applaudable that rather than growing contented, the businesses seem more invested in global excellence than ever before, which will lead the MENA to newer and commendable heights.