Noncommunicable Diseases: A Major Cause of Health Loss and a Burden in the MENA Region

Noncommunicable diseases (NCDs) are the leading cause of death across the world. Furthermore, 1 in every 3 adults worldwide suffers from one or more chronic conditions. According to WHO projections, NCDs will account for more than 70% of all deaths worldwide by 2025, with developing countries accounting for 85% of […]

Home Blog Noncommunicable Diseases: A Major Cause of Health Loss and a Burden in the MENA Region 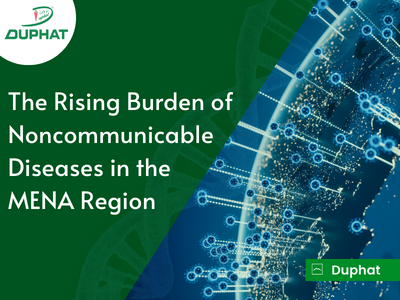 Noncommunicable diseases (NCDs) are the leading cause of death across the world. Furthermore, 1 in every 3 adults worldwide suffers from one or more chronic conditions. According to WHO projections, NCDs will account for more than 70% of all deaths worldwide by 2025, with developing countries accounting for 85% of these. Low- and middle-income countries account for nearly three-quarters of all NCD deaths and 82% of the 16 million people who died prematurely or before reaching the age of 70.

In MENA, the likelihood of dying prematurely from the four major NCDs, namely cardiovascular diseases, cancer, diabetes, and respiratory diseases, is 19%, compared to 12% in higher-income countries worldwide. These deaths occur at the peak of individuals’ economic productivity, imposing a significant burden on families and health systems while also challenging economic growth and sustainable development.

The top noncommunicable diseases, such as cardiovascular diseases, diabetes, cancer, chronic respiratory diseases, injuries, mental health conditions, and several others, are creating a burden on patients and a significant impact on healthcare infrastructure in the MENA region.

The NCD epidemic is wreaking havoc on individuals, families, and communities, and it threatens to overwhelm healthcare systems. Noncommunicable diseases such as cancers, cardiovascular diseases, diabetes, and chronic respiratory diseases, as well as their associated behavioral risk factors (tobacco use, unhealthy diet, and physical inactivity), are posing an increasing economic and public health challenge in the MENA region. The aging population is expected to significantly increase the prevalence of NCDs and the demand for more expensive health care services. Interventions and reforms are urgently needed to prevent NCDs and reduce current and future treatment costs.

In MENA, approximately 25% of the population suffers from high blood pressure. CVDs, cancer, and diabetes represent one-third of the disease burden. Also, high obesity levels are seen in adults aged 20 years or older. In addition, according to the IDF Diabetes Atlas 10th Edition, approximately 73 million adults aged 20-79 years in the MENA region suffered from diabetes in 2021. Diabetes-related deaths in people of working age were highest (24.5%) in the region.

Tobacco use is the leading preventable cause of death worldwide, and it is the only risk factor contributing to all four major NCDs (CVDs, cancers, diabetes, and chronic respiratory diseases). Tobacco use claims the lives of 6 million people globally each year, which is expected to rise to 8 million by 2030.

Smoking is one of the most common risk factors for cancer in the MENA region, particularly lung cancer. Although smoking rates are declining globally, up to 50% of the MENA population uses tobacco, with rates expected to rise to 62% by 2025. There is still significant variation between countries, with Oman reporting the lowest rates. Jordan has the world’s highest smoking rates, with more than 80% of Jordanian men having smoked or used nicotine products.

Aside from smoking, the highest risk factors for many types of cancer include a poor diet, low physical activity, and higher rates of obesity, all of which are increasing in the MENA region. Egypt, Bahrain, Jordan, Kuwait, Saudi Arabia, and the UAE have the highest rates of overweight and obesity, with women ranging from 74% to 86% overweight and men ranging from 69% to 77% obese. This is significantly higher than the global overweight (39%) and obesity (13%) averages.

Moreover, the traditional Mediterranean diet, long regarded as one of the healthiest in the world, is gradually being supplanted by a more traditional Western diet that includes processed foods, fewer fruits and vegetables, more red meat and dairy, and less fiber and healthy fats. Physical inactivity is increasing in adults (particularly women) and children across the region, owing to high temperatures, a lack of support for physical activity from parents, peers, and teachers, and gender norms that discourage physical activity in women. These factors are thought to contribute to higher cancer rates.

The harmful use of alcohol is a contributing factor in over 200 diseases and injuries. Every year, harmful alcohol use kills 3 million people worldwide. This accounts for 5.3% of all deaths. Alcohol is responsible for 5.1% of the global burden of disease and injury, as measured in disability-adjusted life years (DALYs).

Alcohol use among adolescents is associated with various other health risks, including traffic accidents, risky sexual behaviors, violence, and poor mental health. While alcohol ranks 7th among the leading risk factors for all types of deaths and disability worldwide, it ranks 25th in MENA countries. This ranking may reflect the region’s low alcohol consumption, or it may reflect underreporting in surveys due to the stigma associated with alcohol use. Alcohol is officially prohibited in some MENA countries, including Libya, Saudi Arabia, and Yemen, and is considered socially unacceptable in many others. Assessing the actual level of alcohol use in the region is thus difficult for the entire population, particularly among the youth.

NCDs have multifactorial causes; these diseases can be caused by a combination of underlying, modifiable, and non-modifiable risk factors. Investing in primary interventions to reduce behavioral risk factors is the most effective way to prevent NCDs and their metabolic precursors—high blood pressure, cholesterol, and glucose levels, as well as overweight and obesity. Because personal choice and environment influence young people’s health behaviors, interventions must target both young people and those who influence them and ensure the implementation of various supportive, reinforcing policies and programs.

WHO has identified several “best buy” policy interventions that are both cost-effective and high-impact, as well as implementable even in resource-constrained settings. These approaches include taxation and bans on tobacco and alcohol product advertising and promotion, regulations for alcohol availability, enforcement of smoke-free environments in public places, and food industry regulations on salt and saturated fat content.

Furthermore, the MENA government is also implementing strategies to curb the noncommunicable disease burden. The Dubai government monitors population health regularly through the Dubai Household Health Surveys (DHHS). The Ministry of Health and local health authorities have developed and implemented successful strategies in line with WHO’s nine targets, the most recent of which was the ‘Healthy Restaurant’ initiative.

Moreover, the regional Gulf Plan for NCD Prevention and Control 2014-2025, which is closely aligned with the global framework (Gulf Health Council 2019), guides NCD prevention in Saudi Arabia. Furthermore, national strategies provide strategic guidance on NCD prevention, both horizontal strategies (comprehensive strategies that seek to treat all of the underlying issues in a population that cause various diseases and health problems) and vertical strategies (disease-specific top-down strategies that make obtaining funding and measuring results easier). At the macro level, Vision 2030 provides guidance with the broad and ambitious goal of achieving a vibrant society, a thriving economy, and a prosperous nation.

Similarly, several local pharmaceutical companies such as Otida, Julphar, Ciba Health, and others are also trying to strengthen their position in their respective domain. Only a few companies are presently active in clinical research and development activities. Companies are looking to seize opportunities to collaborate with the big giants in the market.

For example, Julphar continues to seek new alliances and partnerships to support its long-term growth prospects while also introducing new products in core therapeutic areas and investing in capital expenditure to improve operational efficiency, resulting in increased market share and geographic presence. These luring opportunities will give a chance to the market players to dominate the MENA region in the coming years.

NCDs are posing an increasing threat to the health and economic security of MENA countries. These diseases will continue to burden healthcare systems, limiting economic growth and development by significantly increasing healthcare costs and lowering working-age productivity. This downward spiral is reversible. Decisions made today can alter the course of the future if NCD risk behavior prevention becomes a priority. With a large and growing young population, the region’s countries now have a window of opportunity to reduce NCD risk factor levels among youth to ensure that they live healthy, productive lives and to reduce the growing health and economic burden of NCDs on individuals, families, and societies.

Moreover, collaboration and coordination across multiple sectors, as well as the involvement of young people themselves, will be required for a successful effort to adapt and scale up strategies to address the four key NCD risk behaviors among young people. Filling critical information gaps through frequent, comprehensive surveillance of risk factors, as well as rigorous monitoring and evaluation of policies and programs, is also critical for identifying the most effective and long-term interventions for the region’s countries.