Introduction Specialty pharmaceuticals are one of the fastest-growing healthcare sectors with a substantial amount of spending by healthcare companies. Although there is no widely agreed-upon definition of specialty drugs, insurers and other health care payers typically define them as expensive prescription products requiring additional handling or administration (such as injection […] 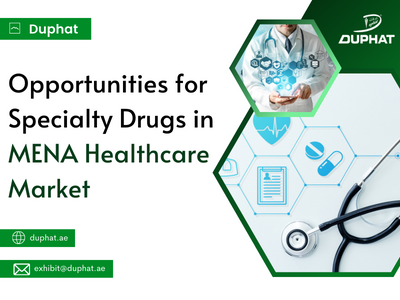 Specialty pharmaceuticals are one of the fastest-growing healthcare sectors with a substantial amount of spending by healthcare companies. Although there is no widely agreed-upon definition of specialty drugs, insurers and other health care payers typically define them as expensive prescription products requiring additional handling or administration (such as injection or infusion) and used to treat complex diseases like multiple sclerosis, cancer, hepatitis C, among others. Specialty drugs include biologics, which are complicated medications made from live organisms, as well as orphan medicines, which are prescribed for extremely rare conditions.

In line with the rising prevalence of multiple sclerosis worldwide, there has been a definite trend toward higher prevalence in the Middle East over the past few decades. For instance, in the first decade of the twenty-first century, prevalence began to increase, with studies from Kuwait, Saudi Arabia, Palestine, and Jordan finding rates between 30-38 per 100,000 people (Yamout et al., 2020).

The MENA region’s population is aging swiftly, and high-cost chronic diseases like cancer, diabetes, cardiovascular disease, rheumatoid arthritis, and genetic disorders are becoming more prevalent. The increased prevalence of diseases in the MENA region increases the demand for a better healthcare system; as a result, the pharmaceutical market in the MENA region is expected to grow and set to emerge as one of the leading emerging markets (Aggarwal et al., 2020).

Recent Launches and Approvals in the MENA region

Biologics and Biosimilars have increased the number of cutting-edge treatment options for rare diseases since they first entered the market. Over a decade, their therapeutic worth has propelled them to the top of the list of available treatment alternatives. The market for both has subsequently grown significantly as a result of this. Numerous biologic and biosimilar product introductions increased stakeholder awareness, and rising per-person pharmaceutical spending has contributed to this trend.

Pharmaceutical players penetrate the potential market regions seeking opportunities by actively pursuing beneficial partnerships. Local players of the MENA region possess knowledge of the market and have a strong understanding and influence in the domestic market. Big Pharma firms have highly developed technology and research and development skills, solid brand equity, and economies of scale.

With different business strategies such as alliance, collaboration, distribution, and licensing, pharma companies offer commitments to provide patients with affordable medications. For instance, Hikma Pharmaceuticals (Jordan based) signed a distribution agreement with Celltrion (South Korea based). The agreement gives Hikma exclusive rights for the distribution and marketing of nine biosimilar products throughout the Middle East and North Africa (MENA) region under its brand.

Additionally, some of the collaborations, agreements, and other business deals in the MENA region are listed below-

Initiatives for the development of Specialty Drugs in the MENA region

The world’s rapidly rising healthcare costs and high drug prices are becoming an increasingly serious issue, especially in developing nations like the MENA regions where consumers frequently have to pay the full cost of prescriptions.

The vagueness of Biosimilar and Biologics around their biotechnology, approval processes, positioning in therapy paradigms, and possibility for side events have been present along with the anticipated economic benefit of introducing such an agent. The Second Symposium on Biologics and Biosimilars, titled “Beyond Clinical Practice,” was held in January 2020, to enhance knowledge of these novel agents in an interactive conference with a wide range of participants and stakeholders on how to incorporate biosimilars into clinical practice. The meeting was in partnership with the Saudi Pharmaceutical Society, Saudi Society for Rheumatology, and Saudi society of Clinical Pharmacy (Omair et al., 2020).

By issuing Presidential directives stimulating the industry, the Egyptian government has shown a significant interest in expanding the nation’s capacity for pharmaceutical production. For instance, EIPICO, a leading Egyptian Pharmaceutical Company, is currently positioned first by units and fifth by value in the Egyptian market. EIPICO, with its new manufacturing facility in the Cairo region, is helping it in becoming the first company in the Middle East and North Africa (MENA) region to produce biological products starting from the cell line through upstream, downstream, formulation, and packing to the final dosage form (Amanda Saionz, 2022).

For better uptake and to enhance the affordability of safe, effective, and high-quality Biosimilars for patients, the Jordanian government issued and revised its guidelines as per the European guidelines. The Jordan Food and Drug Administration (JFDA) Biosimilar registration guidance was formally approved in May 2015 and made available online. The EMA biosimilar guidelines, which are widely regarded as the best-established guidelines in this field, have been implemented in this guidance (Abdelaziz, 2022).

Key players in the MENA market

Foreign companies dominate the MENA market, with only a few local companies, such as Julphar Spimaco, Tabuk, and Hikma, ranking among the top 10. The top five businesses control over 41.5% of the market, indicating market concentration.  In the MENA region, GSK has been engaged with a significant focus on the respiratory, HIV, vaccine, and consumer healthcare industries. In 2013, GSK was also the first business to start producing vaccines in Saudi Arabia. The MENA market is now covered by multinational corporations like Pfizer, GSK, Novartis, and many more.

With a portfolio that includes internal medications, vaccines, oncology, inflammation & immunology, rare illnesses, hospital healthcare, and cardiovascular disorders, Pfizer has been involved in Saudi Arabia since the 1960s.

Additionally, Pfizer has been granted a “trading license” by the Saudi Arabian General Investment Authority (SAGIA), which entitles Pfizer to “100% foreign ownership” of its Saudi Arabian legal entity and the freedom to import, export, and trade in wholesale and retail goods as well as machinery and other items. In 2017, the company started operating a manufacturing and packaging facility in King Abdullah Economic City, Saudi Arabia, worth USD 50 million.

Pharma giants like Sanofi, with revenues of USD 535 million, are in the second position. Over the past 50 years, Sanofi has been a major player in the Saudi healthcare market with products for oral anti-diabetics, insulin, cardiovascular disorders, thrombosis, oncology, transplantation, rare illnesses, vaccines, and consumer healthcare. The year 2020 marks the fifth anniversary of the opening of Sanofi’s Saudi production facility, which is likewise located in King Abdullah Economic City (KAEC). The factory’s location in KAEC is particularly significant because it serves the whole Middle East, not just the Saudi market.

Moreover, GlaxoSmithKline, based in London, has a significant focus on and a leadership position in consumer healthcare, HIV vaccines, and respiratory healthcare, in the MENA market. In 2013, GSK was also the first business to start producing vaccines in Saudi Arabia.

In 2019 Novartis, a Swiss firm present in a broad range of therapeutic areas globally, signed a manufacturing memorandum of understanding with local player Sudair Pharmaceuticals for a technology transfer that would allow Sudair to produce a number of its innovative cancer drugs in the country.

Denmark mid-cap Novo Nordisk is a global leader in the treatment of diabetes as well as other severe chronic illnesses like obesity, growth abnormalities, and hemophilia. Since 1991, Novo Nordisk has collaborated with local business Salehiya in Saudi Arabia and now employs more than 170 people there. Since there are currently 3.8 million diabetics in Saudi Arabia, and that number is projected to grow to over 6.5 million by 2045, Novo Nordisk has made efforts to localize the production of essential diabetes medications like insulin (Patrick Burton, 2020).

Drivers of Specialty Drugs in the MENA market

A very complex market environment for the pharmaceutical sector mirrors the different economic, political, cultural, and public health profiles of the Middle-East nations. Overall, the market for specialty drugs in the Middle East and North Africa is expected to rise significantly over the next few years due to increasing life expectancies and the rising prevalence of chronic conditions, which bodes well for international and local businesses. Local pharmaceutical producers and even international pharma companies from countries like the USA that could establish production facilities in the area and export products are likely to have a promising future. The rising frequency of non-communicable diseases and other illnesses in the MENA region, as well as improvements in the regulatory authorities, will aid pharmaceutical companies in growing their specialty medicine portfolios.

The pharmaceutical industry in the Middle East and North Africa is quite ahead with the number of opportunities it presents, and market growth for specialty drugs is expected in the coming years.