Orphan drugs in the MENA region: Interpreting the market access through the lens of current regulations and market dynamics

Home Blog Orphan drugs in the MENA region: Interpreting the market access through the lens of current regulations and market dynamics 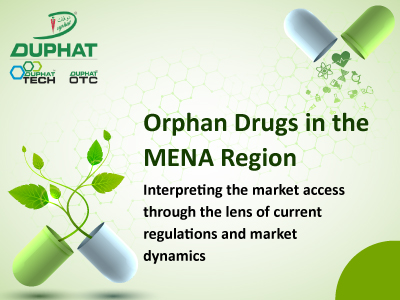 Around 2.8 million people suffer from a rare disease in the MENA region, afflicted with more than 900 rare diseases, including Gaucher disease, Fabry disease, thalassemia, sickle cell disease, etc. The prevalence rate of rare diseases in the MENA region is high due to consanguineous marriages – a significant contributory factor for a large number of congenital and genetic diseases. Despite this, the region lacks the due attention from the pharma companies compared to the west. In order to promote awareness, diagnosis and better treatment facilities, Middle Eastern governments need to work more on the improvement in the infrastructure for the diagnosis and treatment of rare diseases, prioritizing  diseases with higher public health implications along with tackling issues related to the market access and reimbursement.

The centralized process in the GCC has several advantages for the sponsors regarding direct submission and coordinated documentation. While the workload for registration is divided, which improves the quality of the review, queries concerning the application are consolidated and shared with the sponsor. In addition, previous pharmacovigilance and bioequivalence data can also be shared between the GCC countries.

However, the key challenge of the centralized GCC-DR process is that there are no defined timelines for drug registration approval which can extend anywhere from 6 months to 24 months or even more. Most orphan drug reviews take the same amount of time as conventional drugs. Reasons for delays are varied and may include differing dossier review processes and sample analysis timelines in individual member states, the timing of dossier submission versus timing of the next steering committee meeting, and no defined timelines for responses to questions.

In January 2018, UAE implemented the fast-track process for Orphan drugs. Now, the MOHAP Drug Registration Committee evaluates an Innovative Drug or Orphan Drug application within 15 working days of submission and approves or rejects within 10 working days from the date of evaluation of the registration file. This kind of mechanism throughout the MENA region will improve market access. UAE and Saudi Arabia are generally among the first markets where new products are launched, e.g., UAE was the first country where Calquence was launched in November 2018 with Fast Track registration for Mantle cell Lymphoma.

In one scenario, Georg Schroeckenfuchs, Middle East president and head of the MENA Cluster, Novartis, said, “When I first arrived in the UAE, I immediately noticed there was a substantial difference in comparison to Europe with regard to the innovation-friendly environment offered here. In my 32-year long career, I have never experienced an environment quite like this one. For example, the Minister of Health sent us an email stating that he had noticed Novartis was not filing for migraine medication, and the government would like to ensure their patients were one of the first countries to receive access. That was a unique experience for me as in the majority of countries, it is a lengthy process, and a government’s response is normally that there is little or no need for a drug. Once we had filed for the migraine medication in the UAE, it was registered and reimbursed within six weeks. This demonstrates that if you bring innovation, the government will support you on all levels.”

The drug review process through the decentralized process in the MENA region is usually complex and difficult to navigate for foreign companies. Still, certain changes are being made to make the process easy. Furthermore, the guidelines, especially for proper review of orphan drugs, are not very clear. Although countries have a mechanism of priority review of orphan drugs, they are not quite clear in some countries, such as Algeria, Lebanon, Morocco, etc. Additionally, there are no clear registration timelines for drug approval. Besides, the high cost of orphan drugs and reimbursement is an issue in MENA countries and European countries.

Fortunately, ICH-GCP compliance has become well established in all countries across MENA. Furthermore, start-up timelines from submission to trial initiation on average take 4–6 months in sharp contrast to other developing markets such as Russia or China that can take twice as long. In the UAE, new guidelines allow submissions to the Ministry of Health and Ethics Committee to be done in parallel, thus shortening timelines even further. The current regulatory requirements in the MENA region do not mandate conducting local clinical trials.

The countries in the MENA region usually have low orphan drug prices, and the reason is ERP (external reference pricing). In the ERP system, the countries use the list price of drugs from other countries to arrive at a reference price; this set of other countries is referred to as basket and varies from country to country. Recently, Saudi Arabia shrunk its basket from 30 to 20 countries, which shows they can be changed with time. The reference price chosen for setting and negotiation is usually the lowest from the basket. Consequently, the countries may experience availability issues or access delays for certain prescription pharmaceuticals, especially orphan drugs. The cost of high development, not-so-high patient pool, and low prices discourage the pharmaceuticals from launching orphan drugs in the MENA region.

Although the scenario is changing, the recent introduction of new pricing guidelines from the Kingdom of Saudi Arabia has made its market more appealing by allowing companies more flexibility in terms of price and advantaging orphan drugs (e.g., fast-track process). This is a step in the right direction as they are becoming more HTA-focused. The UAE had also brought the new pricing guidelines earlier. This shift will have a positive impact on the region.

The reimbursement process varies across the MENA region, with some having centralized like Tunisia (CNAM), Jordan (Upon inclusion on Rational drug list), Algeria (Ministry of Labor, CNAS), etc. In Saudi Arabia and UAE, the citizens are covered by 100% reimbursement, and for expatriates, it depends upon insurance coverage – the process is not centralized. In countries like Egypt, Lebanon, and most countries in Africa, where out-of-pocket payment is the norm, drugs are out of reach for most patients. Access through government bodies and hospitals is possible but is frequently delayed due to lengthy processes.

The purchasing of orphan drugs is generally done through government tenders or direct purchasing of drugs by institutions through tenders. This tender purchasing limits the availability of drugs to certain centers and institutions specializing in treating orphan diseases, typically in large tertiary care hospitals. There is also a possibility of getting access to early programs in all major markets; however, no legal guidelines exist except in Algeria and Morocco. Drugs are ordered on a patient name basis, which is generally paid out of pocket, though for Saudi Arabia and UAE, there is a reimbursement provision for nationals.

The reference pricing is currently adopted with different levels of maturity across MENA. It is likely that reference pricing will evolve (i.e., expansion/change of reference basket), and HTA assessment might be considered even for orphan drugs. Although reimbursement is granted, affordability will remain a challenge in several self-pay markets like Lebanon, Morocco, and Egypt. Patient access programs are becoming more common, and they help to ease the burden. The availability of orphan drugs is a significant challenge across the MENA region due to the high price of orphan drugs, lengthy approval, logistical challenges, and complex geopolitical situations in some countries. Considering that the policies and situation are improving and both will have a direct relation with the access; as the policies improve, so will the access. As health care improvement rises in priority in Middle Eastern countries, as a natural consequence of economic development, more  focus on rare diseases and orphan drugs is expected in the future.