Pompe Diseases are usually characterized by a deficiency of an enzyme called acid alfa glucosidase (GAA). The enzyme helps by breaking down complex sugars in the body which, when in deficiency causes Pompe disease. The disease is a rare disorder with a current worldwide prevalence of 1 in 5,000 to […] 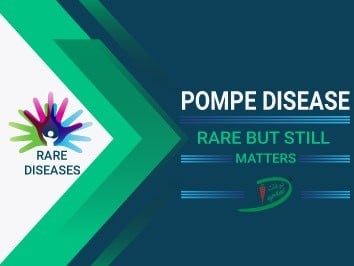 Pompe Diseases are usually characterized by a deficiency of an enzyme called acid alfa glucosidase (GAA). The enzyme helps by breaking down complex sugars in the body which, when in deficiency causes Pompe disease.

Global burden aside, estimating Pompe disease epidemiology is not easy.

Emerging markets such as the UAE and Saudi Arabia are facing several kinds of hindrances in assessing the disease epidemiology correctly, due to the limitations in R&D and absence of an organized regulatory framework such as the US Orphan Drug Act (1983) and the European Union (EU) Regulation 141/2000.

However, available statistics, in terms of prevalence in emerging markets show that the number of patients living with Pompe disease was reported to be 52,393 in 2017 and is expected to increase to 56,572 in 2028 at a CAGR of 0.77%.

The diagnosis of Pompe disease often poses a diagnostic dilemma due to the rarity of the condition. Moreover, the relatively nonspecific nature of the phenotypic features only leads to suspicion of Pompe disease. The diagnostics tool majorly in use to detect Pompe Disease apart from Clinical evaluation, includes- Measurement of GAA activity, Level of Glc4, & Mutation analysis.

The management of the disease is specific yet incomplete, as even though the treatment of Pompe Disease is disease-specific, symptomatic, and supportive, there lies a scope to evolve. Currently, the only available treatment regimens for this disease include Enzyme replacement therapy & Supportive therapies.

Due to the lack of standard treatment options, the indication reserves space for research to manage Pompe disease.

Lumizyme (alglucosidase alfa) is an enzyme replacement therapy produced by recombinant DNA technology which is currently available in the market. It provides an exogenous source of acid α glucosidase (GAA), an essential lysosomal enzyme that is deficient or absent in patients with Pompe disease, leading to intralysosomal glycogen accumulation.

Similarly, ACTUS-101 is an investigational gene therapy for Pompe disease that uses a harmless virus, called the adeno-associated virus (AAV), as a vehicle. The gene therapy, delivered into the blood, specifically targets the liver to promote the production of the GAA enzyme. ACTUS-101 received the fast track designation from USFDA for Pompe disease

As per Delveinsight analysis the therapeutic market of Pompe Disease in the 10 Emerging Markets (including UAE and Saudi Arabia from the Middle East region) is expected to reach USD 358.20 million by 2028 from USD 116.26 million in 2017, at a Compound Annual Growth Rate (CAGR) of 10.77% for the study period (2017-2028). DelveInsight’s analysis reveals that the emerging market has propelled the revenue generated from therapeutics (ERT) for the treatment of PD to a large extent (~22% Y/Y basis).

“DelveInsight’s estimation suggests that the Middle East is a major contributor to the sales of the drugs for Pompe disease. These regions are also termed as ‘Pharmerging’ markets based on economic parameters such as purchasing power parity (PPP) indices and absolute spending growths.”

As per KOL views and improved diagnostic trends across the globe for Pompe Disease, there seems to be largely untapped market waiting to be identified. Although global prevalence estimates quote worldwide PD numbers to be somewhere ranging between 5,000-10,000 cases, recent insights and DelveInsight’s analysis project much larger numbers. These larger numbers are nothing but the potential patient pool representing the highly untapped market which can be capitalized. Improved diagnostic guidelines accompanied by increased use of innovative screening techniques, along with the expected relaxed regulatory guidelines and higher governmental insurance coverage will lead to an increase in the market size of PD in the coming years.