Precision medicine is a specific type of approach that allows doctors to select treatments for patients based on the genomic understanding of the patients’ disease. Recent advancements in Research and Development have sped up the pace of research in the MENA region. Precision medicine is an evolving method for a disease […] 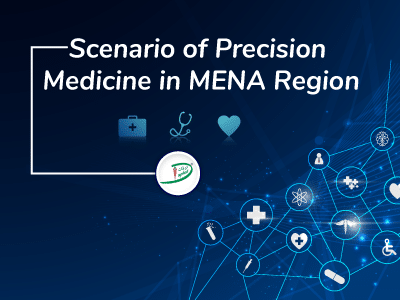 Precision medicine is a specific type of approach that allows doctors to select treatments for patients based on the genomic understanding of the patients’ disease. Recent advancements in Research and Development have sped up the pace of research in the MENA region. Precision medicine is an evolving method for a disease that analyses a persons’ variability in genes, environment, and lifestyle, which is specific to that person. The approach will also help doctors and researchers to foresee which treatment and prevention strategy for a particular disease will work and in which group of people. The rising adoption of precision medicine in the MENA region may benefit significantly from a precise crucial allele reference genome. Predominantly, this region is considered a highly prevalent region of consanguineous marriage and eminent incidence of some Mendelian disorders such as Muscular dystrophy, Thalassemia, and Cystic fibrosis. This is the region where various disease studies are facing the problem of too many variants per sequencing experiment.

The UAE is among few countries in the MENA region which is adopting modern & innovative healthcare approaches to combat such issues. Increase in funding and revolutionary initiatives have led to astonishing growth of the UAE healthcare market. To further streamline its process, the country’s current agenda Vision 21 focuses on developing world-class healthcare infrastructure. Personalised medicine is one of the novel therapy approach where researchers and physicians of the country are focusing, owing to the increased prevalence of non-communicable diseases such as diabetes and cancer. HIV prevalence is categorized as one of the lowest in the world, as per the Global AIDS Response Progress Report 2014; however, among the migrants, higher prevalence is notably observed.

The optimism lies in the research advances relating to genetic diseases and expansion efforts of laboratories’ offerings to include personalised diagnostic services across UAE In April 2018, the Middle East’s first C4IR affiliate centre was launched in UAE in collaboration with the Ministry of Cabinet Affairs and the Future. C4IR UAE will strengthen the Forum’s strategic relationship with the UAE and will emphasize on precision medicine, as well as blockchain, artificial intelligence and machine learning.

Other countries in the MENA region are also testing the waters by experimenting in personalised medicine. Speaking of other countries, one such example is of Qatar, where, in order to facilitate genome understanding for precision medicine, significant allele SNPs and indels were identified, and the GRCh37 reference genome was modified at these sites to produce the Qatar Reference Genome (QTRG).

Talking about Israel, the country has enormous advantages in accelerating Precision medicine market due to the vast scope and high reliability of the genomic databases. Recently, in May 2019, Israel Precision Medicine Partnership (IPMP) operated by Israel Science Foundation selected 14 research teams and funded them with USD 16.6 million from the new Israeli fund for the innovation in the arena of precision medicine. The teams were picked after a widespread selection procedure by an international committee directed by Professor Roger Kornberg of Stanford University, a Nobel Prize laureate in chemistry.

Discussing Algeria in the MENA region, one of the country managers from a leading pharmaceutical company explains that Herceptin, which is the first-generation personalised medicine that was previously launched in Europe, is expected to enter the market of Algeria region and will be available to all the breast cancer patients soon.

Also, in December 2016, The Magdi Yacoub Heart Foundation Egypt started a new research centre in Aswan with the main focus directed towards precision medicine and personalised therapies. A researcher from this centre clarifies that with the help of the latest genome sequencing technology, this information gap can be closed and new personalised or precision treatments can be used for the better cure of the diseases.

The MENA region, without a doubt, has witnessed impressive growth in the healthcare sector with high quality of research aiming to innovate the diseases are treated. Several educational centres and investigators have started to study the scope of precision medicine in treating disorders which are poised to be a burden on the region. Moreover, initiatives to incorporate genetic research and creating a new focus on translational research is also being carried out by the laboratories and health institutes.

The feasibility of utilizing precision medicine in the MENA region for treating diseases can be accelerated by the population scale genome projects, state art infrastructure, awareness and acceptance of genomics and a universal healthcare system. Although, some of the genome projects from the region are still under consideration, however, it is to be emphasized that with the collaborative efforts between projects in the region, suitable funding, creation of regulatory frameworks together with clear policies and procedures that govern IP would empower successful commercial manipulation of the knowledge base. Consequently, collaborations and consensus will be the key success of precision medicine in this region.