The Opportunity for Generic Drugs in the MENA region

Introduction The Middle East and North Africa (MENA) pharmaceutical industry has had impressive growth in recent years and is predicted to reach about US$60 billion by 2025. Out of 19 countries in MENA Region, the pharmaceutical market of Bahrain remains the smallest while the Kingdom of Saudi Arabia (KSA) and […]

Home Blog The Opportunity for Generic Drugs in the MENA region 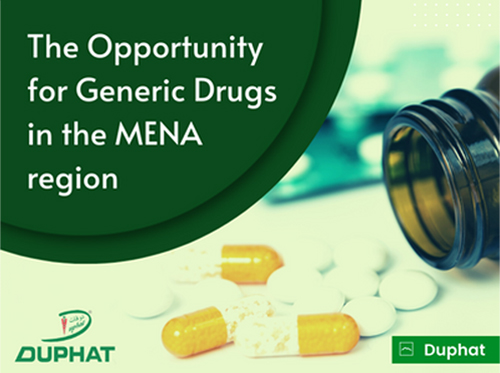 The Middle East and North Africa (MENA) pharmaceutical industry has had impressive growth in recent years and is predicted to reach about US$60 billion by 2025. Out of 19 countries in MENA Region, the pharmaceutical market of Bahrain remains the smallest while the Kingdom of Saudi Arabia (KSA) and the United Arab Emirates (UAE) are the largest due to a growing population and new westernized lifestyle.

There are more than 120 pharmaceutical companies in the MENA region. All Middle Eastern nations, with the exception of Syria and Iraq, are major importers of name-brand pharmaceuticals and branded generic medications.

Government play a crucial role in the MENA region’s pharmaceutical industry by regulating both the sector and its prices through their Ministries of Health. The Saudi government is aggressively attempting to encourage generic consumption by limiting imported branded pharmaceuticals and encouraging local generic manufacturing, in an effort to reduce healthcare costs and diversify their economy. Recently, there have been some major investments made by international companies in the nation, including joint ventures with domestic producers and the construction of new facilities.

There are a number of factors such as rapid population growth, and aging, among others that make the Middle East and North Africa (MENA) a desirable location for the pharmaceutical business. There is a significant unmet medical demand in the area. One of the most crucial factors is the population’s longer average lifespan and lower death rates. Additionally, the shift in lifestyle over the past few years has resulted in a number of common ailments, such as diabetes, cancer, heart disease, etc., resulting in a shift in the pharmaceutical market becoming more attractive. (Tantash, 2012)

The MENA area has a sizable market for generic medications. It is estimated that it that generic drug market will continue to increase over the anticipated time period, with lifestyle shift being the main drivers of this expansion. Every year, there are an increasing number of individuals opting for generic drugs because of chronic intake of medicines for diseases such as central nervous system, cardiovascular disease, oncology indications, and diabetes, as these and other diseases are on the rise in terms of prevalence.

Saudi Arabia is one of the most alluring markets in the MENA region. The sheer scale of the market, the sophistication of the demand, and the positive epidemiological trends are major draws. Given the necessity to meet the growing volume of demand for reliable and effective generic therapies, local players will also discover a robust commercial base.

The government’s promotion of generic replacement as a cost-cutting measure supports Saudi Arabia’s generic medication market and serves as a primary growth driver of this trend. In Saudi Arabia, spending on generic drugs is anticipated to increase quickly over the long term compared to that on patented drugs, amidst some improvements in regulatory standards in the country and industry bias in favor of local producers.

The population’s relatively high per capita spending on pharmaceuticals and prescribers’ predilection for copyrighted medications are two major barriers, albeit both factors will facilitate the growth of branded generic drugs.

Government support fuels the local generic industry in the nation. Plans for stronger regional integration and a greater emphasis on medications produced within the GCC will benefit local generic drug companies. The region’s efforts to reduce its disproportionate reliance on imported medications.

The government’s promotion of generic replacement as a cost-cutting measure will operate as a primary growth driver of this trend, supporting the kingdom’s generic medication industry.

This is especially valid in light of Saudi Arabia’s “Vision 2030” and National Transformation Plan 2020, which have already caught the interest of Merck Sharp & Dohme, Sanofi, and Julphar Pharmaceuticals. Although many international corporations in Saudi Arabia focus primarily on producing branded goods, these companies are strengthening their generic medicine production, and more collaborations with regional generic drug producers are anticipated.

The long-term goal of Saudi Arabia to generate 40% of all pharmaceuticals domestically is ambitious but doable with sufficient funding. This may not be likely due to the increased commoditization of generic medications and competition from China and India, as these businesses will continue to enjoy a significant competitive advantage without receiving preferential treatment or entering the market for pharmaceuticals that are challenging to manufacture.

What are the drivers and foreseen opportunities for generics in the MENA region?

The Middle East’s generic pharmaceutical industry is growing exponentially and is being driven by several demographic factors. These factors include the rapidly altering dynamics of the population, such as population growth and aging populations. Due to the high number of pending patent expirations, generic medications have performed better in the Middle East. However, as the number of pending patent expirations declines, this tendency will reverse, providing global corporations with an excellent opportunity to enter the market. (Generic Pharmaceutical Policies in the MENA Region, n.d.)

A greater emphasis on population health, technological advancements in product innovation, and a rise in Middle Eastern pharmaceutical distributors have been the main forces behind the UAE’s phenomenal expansion in the pharmaceutical business. Increase in population and affluence have increased demand for medicinal products on the supply side. On the supply side, medicinal products are now being produced as a result of technological advancements. Local pharmaceutical firms in the Middle East primarily produce generic drugs or collaborate with foreign firms on joint ventures. (MENA Markets Offer Growth Opportunities for Generics, n.d.)

In order to raise public knowledge of diseases, governments are developing a variety of national health programs. Rising per capita income and greater healthcare awareness have led to an increase in demand. In the upcoming years, the demand for pharmaceuticals is anticipated to be driven by a high life expectancy and rapid population expansion. Increased access to healthcare and a drop in mortality rates contributed to this population expansion. Moreover, increasing the use of generic medications achieves macroeconomic efficiency goals and helps ensure the financial viability of the healthcare system.

The Middle East and North Africa (MENA) region’s health care systems face difficulties in providing healthcare services as a result of a confluence of factors including an increase in the prevalence of non-communicable diseases, fiscal and economic pressures, and, in some countries, a renewed focus on providing universal health insurance coverage, which puts additional strain on health care financing. As a result of the worldwide economic downturn, public health systems are under growing pressure to cut back on rising medication budgets. (MENA Pharmaceutical Market | CHEManager, n.d.)

MENA Region seems to have a lucrative opportunity for both local and international pharmaceutical companies for generic drug manufacturing and import. S. The improved healthcare scenario, which includes decreased mortality rate, and improvements in the healthcare system has led to an increase in population which in turn has led to increased disease rate and generics demand. Sudan, Kuwait, Jordan, among other nations, are still working to integrate generics into prescription activities. Post- Covid multiple initiatives are been taken by the government to promote local generic manufacturing to deal with the increasing disease burden. (MENA Pharmaceutical Market | CHEManager, n.d.)