Awareness towards a Neurological condition, Epilepsy: Promising Futuristic Insights in the MENA Region

Epilepsy is one of the most prevalent debilitating neurologic condition that results in disability and tremendous socioeconomic burden. It is a global problem without national or ethnic boundaries; however, its prevalence and incidence vary among different countries. Approximately 2 million patients are living with Epilepsy live in MENA, with a […] 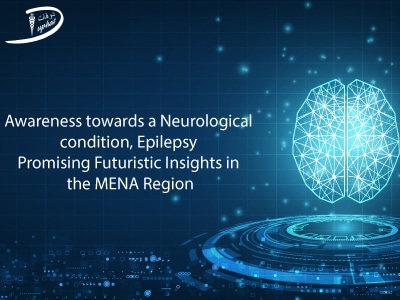 Epilepsy is one of the most prevalent debilitating neurologic condition that results in disability and tremendous socioeconomic burden. It is a global problem without national or ethnic boundaries; however, its prevalence and incidence vary among different countries. Approximately 2 million patients are living with Epilepsy live in MENA, with a population estimated at 355 million.

“The two major Middle Eastern practitioners who dealt with epilepsy in medieval times were Ibn Sina (980–1037) and Al-Razi (circa 865–925), and they considered epilepsy a medical illness. Their writings had a profound influence in Europe, and as late as the 1700s this material was still fundamental for medical students in universities around the world. Ibn Sina, the “Prince of Doctors”, was scientific and rational in his treatment of epilepsy and left an abundance of pertinent details. He was the first person to coin the term “epilepsy”, using a passive Latin verb.”

MENA Region is experiencing an unmet need as there are not an adequate number of neurologists. Moreover, there is still a need for understanding the exact burden of disease. The lack of figures and facts can be attributed to the absence of one global definition of the condition.

Besides the dearth of Epilepsy epidemiological stats, the social stigma attached to neurological disorders is one of the biggest hurdles that Epileptic patients come across. Many studies have shown that Epilepsy is associated with several psychosocial morbidities, including depression, anxiety, low self-esteem, and little self-control. This often results in Epileptic patients to withdraw themselves socially and opt an isolated life. It is shocking to note that in many countries, it was believed that the disorder is due to some hidden supernatural powers.

Several studies have shown that it was seen that families opting for consanguineous marriages also increase the risk of developing genetic disorders like Epilepsy in later progenies.

However, past years witnessed efforts from the governments of the MENA countries to eliminate the misconceptions related to neurological disorders like Epilepsy. Vocational training programs to patients as well as their supporters and spur in disease awareness has likely resulted in better diagnosis of the disease.

In addition to probable research benefits, medical service planning for epilepsy would be facilitated by increased knowledge within MENA populations. Accordingly, implementing public education and awareness programs can significantly help patients suffering from epilepsy, particularly in developing countries. Awareness provides an impending insight for devising efficient future advancements, which thereby proves to be beneficial for the extended period of time. As per the record through various literature-based studies, in the last decade, many interventions and campaigns have been carried out in several Arab countries to change approaches toward epilepsy.

There have been profound steps implemented in the MENA Region for epilepsy focusing toward future research related strategies to increase acceptance of epilepsy and improve understanding of the disorder, which will enhance self-efficacy and promote more positive outcomes.

The MENA governments are taking initiatives to improve the overall health of their citizens, thus being a hotbed for the international pharma giants to exploit the opportunities.  This will also support in reducing stigma (due to unmet needs) by providing vocational training to encourage patients with epilepsy, thus helping them out in gaining or retaining employment. Besides, flourishing progress is being made in the region towards achieving high-throughput goals, such as universal primary education, innovative ways to comfort the patients with anxiety and depression along with adequate progress in reducing child mortality.