Present Trends in Newborn Screening, Genetic Counseling, and Emerging Drug Therapies in the Effective Treatment of Alpha (α)-Thalassemia in the MENA Region

The occurrence of thalassemia is an issue of major concern in the health sector of certain countries, including the Middle East and North Africa (MENA region), Southeast Asia, Central Asia, and the Indian subcontinent. According to DelveInsight’s analysis based secondary sources, countries in the MENA region, particularly the Gulf Cooperation […] 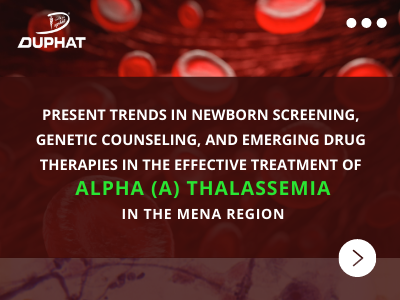 The occurrence of thalassemia is an issue of major concern in the health sector of certain countries, including the Middle East and North Africa (MENA region), Southeast Asia, Central Asia, and the Indian subcontinent. According to DelveInsight’s analysis based secondary sources, countries in the MENA region, particularly the Gulf Cooperation Council countries (GCC) and the UAE, have a higher  Alpha-thalassemia prevalence than in Europe and North America – the reported prevalence amongst the countries in the region ranges from 2 to 10 %. The condition has also become increasingly prevalent in nonendemic Europe, North America, and Australia owing to population migrations. The issue is, therefore, assuming global significance.

In addition to rising Alpha-thalassemia prevalence, the management of the condition also remains a challenge. In the past, major pharma companies were afraid to enter the Alpha thalassemia market of Africa and certain countries in the Middle East owing to the lack of health care infrastructure to help adequately diagnose and treat patients, which limited the business potential in those otherwise viable markets. However, recent trends point to an increase in genetic counseling, newborn screening, and a significant increase in interest of big pharma giants such as Agios and Silence Therapeutics to capture a fair share of the market for Alpha thalassemia patients in the region.

Screening programs have now been established in all continents, in both hemoglobinopathy-endemic and hemoglobinopathy-nonendemic regions, targeting either entire national populations or high-risk groups. Increased NBS has turned out to be a pragmatic approach in the MENA region, as it has helped open the window for early detection and treatment of the condition, thereby reducing the healthcare expenditure and cost burden on thalassemia patients and their caregivers.

Updates on Emerging Drug Development in the MENA region

As in the case of the US and Europe, the emerging Alpha thalassemia pipeline in the MENA region is virtually dry as there are only a few key players investigating their products for the patient pool.

In the past, the attention of companies was focused on patients with beta-thalassemia. However, recent years have witnessed a shift in interest of the leading companies to Alpha thalassemia. Owing to the lack of drugs in the region for effective management of the condition, the upcoming therapies by Agios and Silence may give them a first-mover advantage globally, particularly in the MENA region. In this space, it will be interesting to watch the progress of approval and market access of these drugs in the near future.

The growing thalassemia prevalence and its resultant burden is definitely an issue in the MENA region. The problem is compounded by the fact that significant data gaps exist, which come in the way of a proper appraisal of the burden and thalassemia treatment in this region. Therefore, an increase in research and awareness in the field is recommended. Interestingly, in the last decade, the UAE has made significant progress in preventive management resulting in a significant reduction in the prevalence of thalassemia. The mandatory premarital screening program is the most important part of the national preventive campaign against thalassemia. These tests necessitate the public to undergo screening before getting married in the UAE. Moreover, although the emerging pipeline for α-thalassemia in this region is relatively dry at present, physicians and researchers are working rigorously toward increasing awareness, improving diagnosis, and researching for developing novel and potential therapies in the future.

In conclusion, recent years have witnessed an increase in premarital counseling and newborn screening to facilitate early detection and effective thalassemia management in the MENA region. The region holds a vast scope for further advancement in the development of effective therapies at a reasonable cost and their approval and market access!!